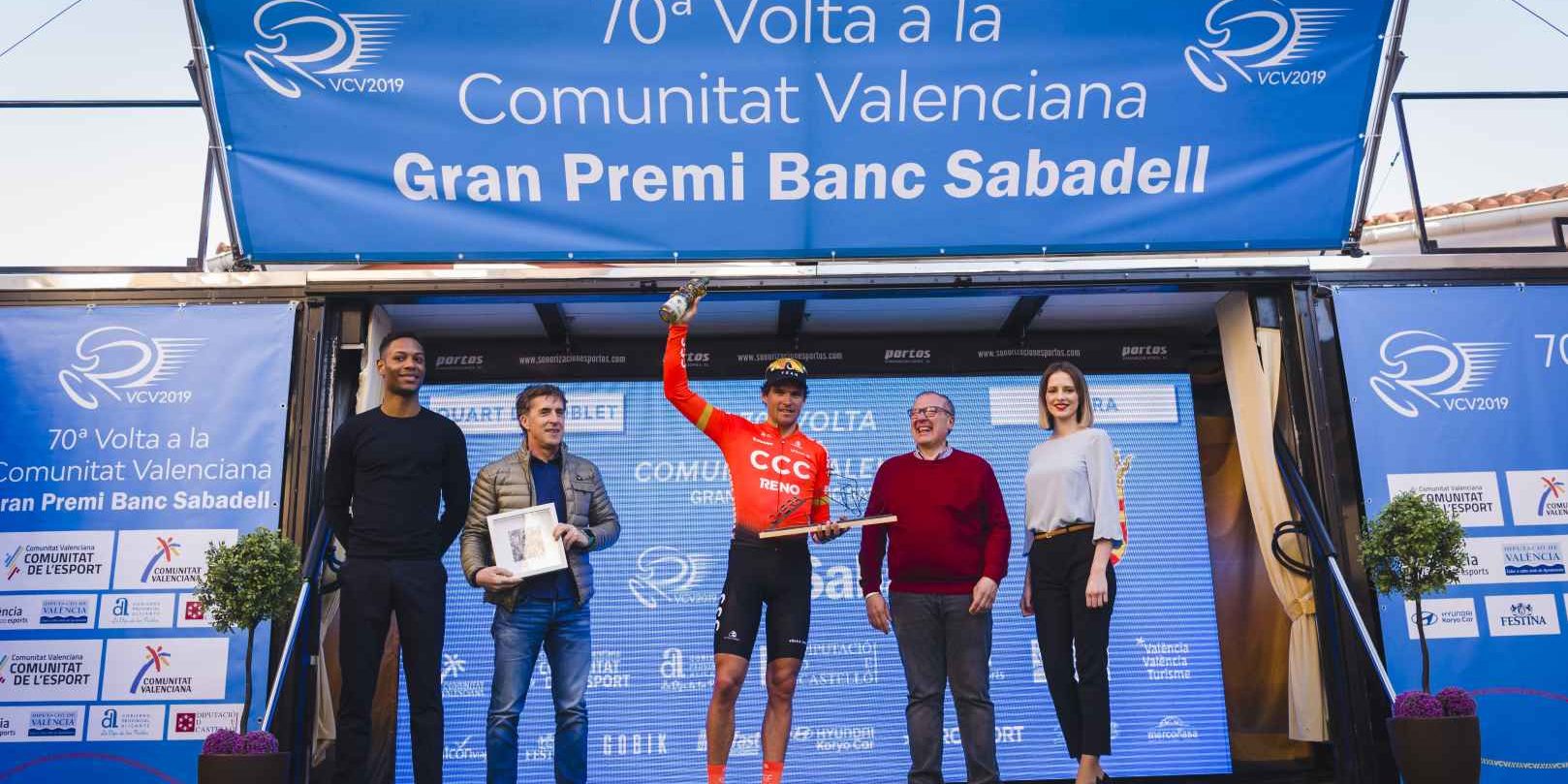 The stage was raced on a 198 km route from Quart de Poblet to Chera, a long and demanding stage including five category 3 mountain climbs. After today’s stage Van Avermaet
expressed being very happy with his first win of the season, “I felt good today and I was in great shape right from the start of the race. Happy being able to defeat strong rivals like Trentin, Luis Léon Sánchez and Valverde.”

The general classification leader continues being Edvald Boassen Hagen. His team, Dimension Data, defeated strongly Edvald’s possibilities to maintain as a leader, the breakaway opportunities by any other team or rider were minimised.

Diego Rubio of the BH-Burgos team maintains his position as the leader of the mountain classification. The jersey for the best young rider was awarded to a Bahrain-Mérida cyclist Iván García Cortina, and the orange jersey (general combined) was awarded to Luis León Sánchez representing the Astana team.

Today the VueltaCV was accompanied with a special guest, the well known former professional cyclist Pedro Delgado. Who also made the honor of awarding todays stage winner during the podium ceremony. The former cyclist declared being delighted to accompany the VueltaCV and highlighted the strong level of competition during this year’s race.

Many cycling fans had gathered on the streets of Quart de Poblet this morning to cheer for the cyclists while they started the beautiful mountain stage of the VueltaCV 2019. A stage in which ten cyclists made a breakaway attempt 23 km, being : Duval (ALM), Andemeskel (ICA), Van Hecke (SVB), Barthe (EUS), Barceló (EUS), Kulikov (Gaz), Alarcón (W52), Moreira (CJR), López (EUK) and Rubio (BBH).

The three riders at the head of the race increased the difference with the peloton to 7 minutes when they passed Chera for the first time. The cyclist from Avila, Diego Rubio, maintained his lead during the third mountain climb of the day, the Alto de Requena(category 3), followed by Van Hecke (SVB) and Moreira (CJR).

The difference with the squad led by the teams Dimension Data and Sky was 6’30”, and it decreased considerably when the lead was taken by the Astana team during the climb of the fourth mountain, Mata Parda (category 3), where Diego Rubio (BBH) crowned themountain first followed by Van Hecke (SVB) and Duval (ALM). While at the same time the Astana team was leading the peloton and slowly but steadily diminishing the differences with the breakaway group.

At the time of the last mountain climb of Alto Sot de Chera (category 3), the leading escape group was reduced to four cyclists: Van Hecke (SVB), Barthe (EUS), Barceló (EUS) and
Rodrigues (W52), when only 15 km were remaining. At the same time visible strategical movements between the teams were noticed, while tactics began to find the best position for the lastkilometres of the race.

The Movistar team, with Valverde in front, took positions in the peloton just 1’20» behind the race leader. The order of passage through the last mountain was as follows: Van
Hecke crowned the first position, followed by Barthe and Barceló. The breakaway group was caught up when only 8 km were remaining of the race. From that moment the awaited fight of the stage win began, with various breakaway escape attempts that did not last for long. Greg Van Avermaert was able to play his tactics better than anyone else and made an aggressive attacked from adistance. When only 300 meters were remaining to cross the finish line he managed to secure the first position with a spectacular arrival.

Tomorrow the 70th VCV moves to Castellón where the queen stage will take place between Vila-real and Alcossebre. This stage will end at the top of l’Ermita de Santa Llúcia. A demanding stage of 188 km with four mountain climbs and very exigent final, including ramps of 20%. It will be during the last kilometres of this stage in which the winner of the VCV 19 will be decided.