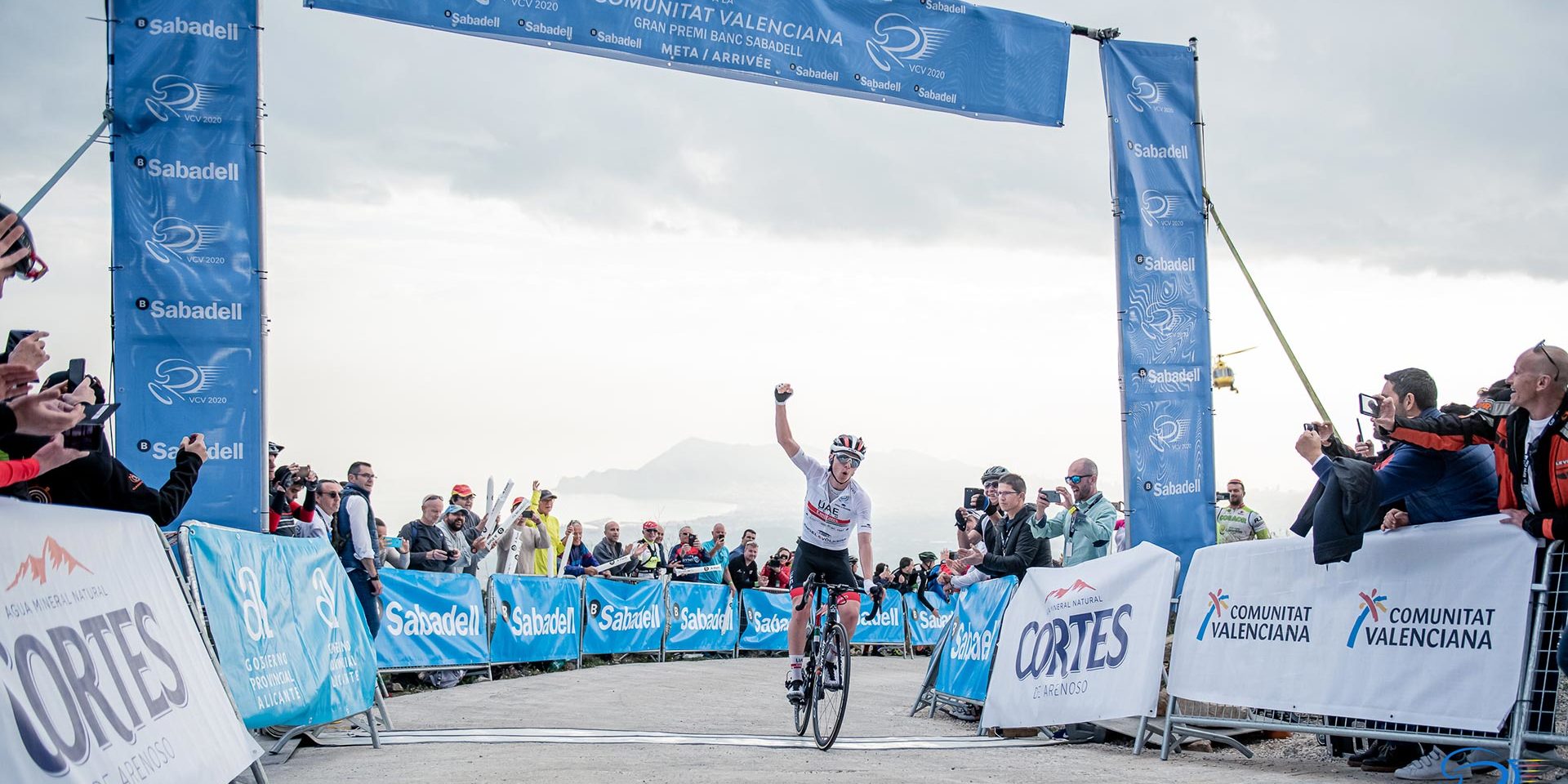 The Slovenian cyclist Tadej Pogacar, from the UAE Team Emirates, won the queen stage in the 71st Volta a la Comunitat Valenciana Gran Premi Banc Sabadell, that was celebrated in spectacular cycling conditions and with an exciting finish taking place at the unprecedented Sierra de Bernia in Altea. Cyclist Pogacar is the leader and virtual winner of 2020 VCV when only one stage is remaining. The Slovenian cyclist expressed being extremely happy of today’s victory. «It was a very hard climb, and unknown for me since I have not had the opportunity to train here before, but thanks to the great team effort everything worked out well.» «The plan was to control the race and attack at the right time and I have done that» added the young Slovenian who plans to take part in the next edition of the Paris-Nice and the Tour de France.

Today cyclists fronted a demanding route of 170 kilometers, taking them through the interior of Alicante from the town of Calpe to the spectacular surroundings of the Sierra de Bernia in Altea, including four mountain passes. During the first 17 kilometers seven cyclists managed to escape Declercq (DQT), Van Avermaet (CCC), Van Hooydonck (CCC), Duval (ALM), Serrano (CJR), Cubero (BBH) and Carboni (BCF). Until Cubero del Burgos BH was reached by the peloton led by Mitchelton Scott.

The race continued with the escape group formed by Declercq (DQT), Van Avermaet (CCC), Trentin (CCC) and two Spanish cyclist  Bilbao (TBM) and Carboni (BCF) who crowned the mountain pass of Alto de Benimatell (category 2) in first position with 2 minutes and 10 seconds ahead of the peloton that was still led by Mitchelton Scott.

During the third mountain climb of Confrides (category 2) the difference of the peloton was maintained with the six riders leading the race at 2´40´´. The Spanish cyclist Gonzalo Serrano (CJR) crowned the mountain passes of Coll de Rates and Confrides in the first position, which guaranteed him the jersey of the king of the mountain, while keeping the race situation unchanged with a difference of the peloton and escape group on 2´52´´. In the descent of the fourth mountain, the Alto de Tudoms (category 2) the race was still lead by Declercq (DQT), Van Avermaet (CCC), Trentin (CCC) and the two Spaniards Bilbao (TBM) and Carboni (BCF) with a 1´50´´ difference to the peloton.

During the last 50 kilometers, the cyclist from the teams UAE and Mitchelton assumed the control of the peloton. The escape group was led by Van Avermaet and Trentin from the CCC while the difference of 2´12´´ was maintained, before the final unprecedented and extraordinary demanding climb at the Sierra de Bernia (category 1), including gradients greater than 20%. Shortly, the difference between the peloton and the breakaway group formed by Declercq, Van Avermaet, Van Hooydonck, Bilbao, Serrano and Carboni was reduced to 1´35 ´´. As the stage progressed through the demanding climbs of Sierra de Bernia the gap was reduced even more until reaching just 45 seconds difference between the escape and the peloton group led by Milchelton team.

The final stage of the demanding climb was crucial, the advantage of the three escaped cyclists Declercq, Van Avermaet and Pello Bilbao was only 33 seconds. At the end the escaped cyclists were reached by the peloton, except for the Olympian Van Avermaet who continued climbing alone, closely followed by the head of the peloton formed by Kwiatkowski, Pogacar, Haig and Valverde. However, 2 kilometers from the final, the cyclists were grouped until Tadej Pogacar attacked and escaped, showing his great potential in his debut in the 71st VCV.  Pogacar claimed his second victory of the Valencian round, with only an age of 21. The Slovenian has shown having all the ingredients to become a champion.

Tomorrow, Sunday, the II Vuelta CV Féminas will be celebrated with departure from the Paterna Town Hall, at 09:00 hours and finishing at Town Hall Square of Valencia at 11:30 hours. The last stage of the Vuelta CV is celebrated at the same route of 97.7 km.

Likewise, the last stage of the 71st Volta a la Comunitat Valenciana Gran Premi Banc Sabadell, will also start from Paterna at 13:30 and finish at Town Hall Square of Valencia.

Provisional Classification of the 4th stage: