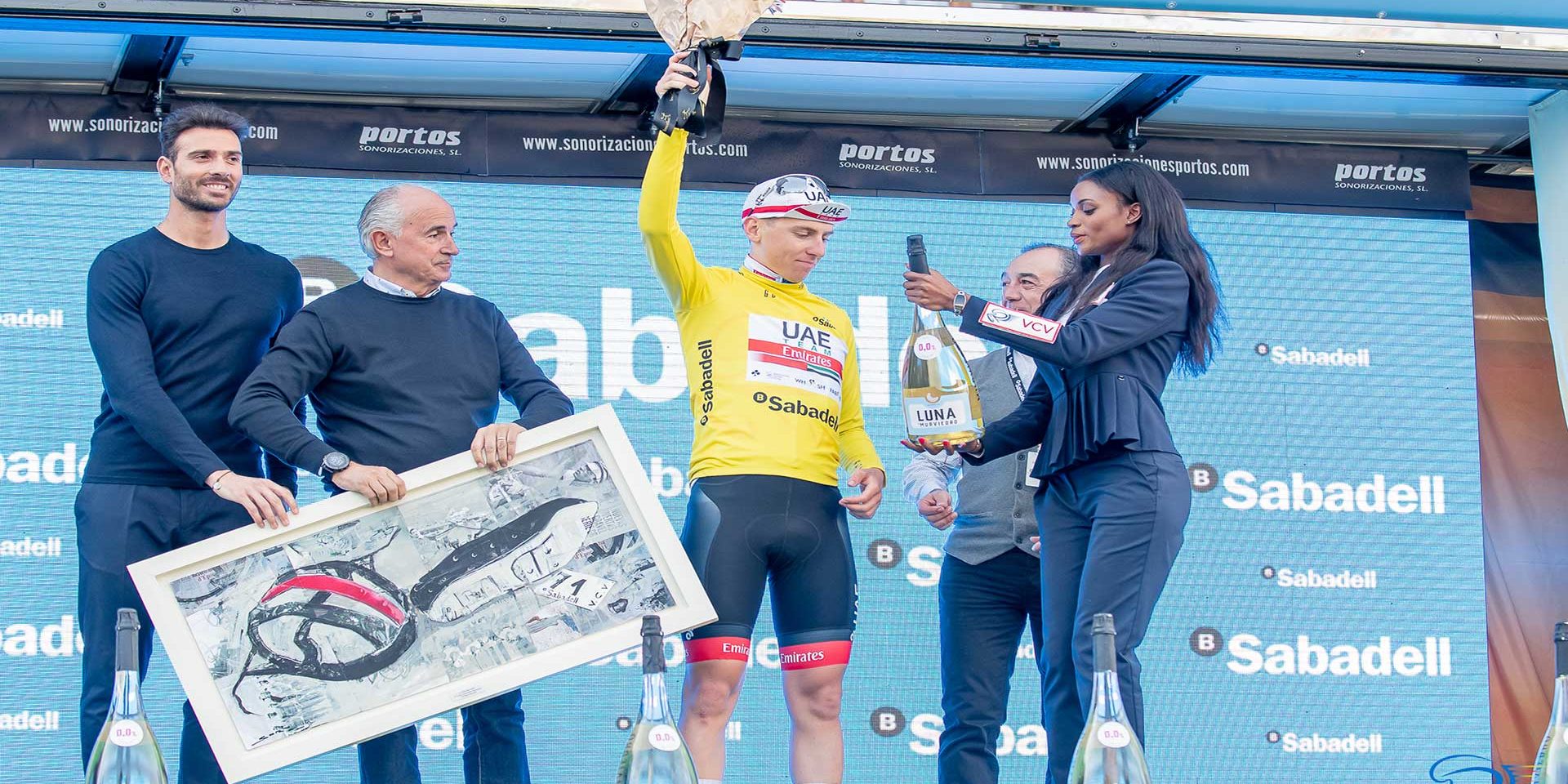 The Slovenian cyclist Tadej Pogacar of the UAE Emirates team, has been proclaimed winner of the 71st Volta a la Comunitat Valenciana Gran Premi Banc Sabadell. The last stage of the event was celebrated today with a finish line located at the town hall square of Valencia. The Deceuninck Quick Step cyclist Fabio Jakobsen finished with a spectacular sprint final stopping the timer at 2:04:32.

After the race, Pogacar, the flamboyant winner and cyclist with great future expectations in the cycling world, stated being very happy with the victory and stressed that it has been a wonderful race. «I have had good sensations and feelings during the whole week, it has been very beautiful race with many challenging moments, but I felt the support of our team at all the time.» The statement of this 21-year-old Slovenian cyclist regards to personal future expectations is very clear, «I don’t know where I will go, but I will try to do my best.» Without a doubt, Pogacar is one of the great cycling figures, he has had exceptional cycling performance during these five days of intensive racing with average speeds performance at each stage higher than initially forecasted.

The director of VCV 2020, Ángel Casero, stated that he is very satisfied with the results of this year’s edition, celebrated for the first time under the category Pro Series. “We had very good cycling conditions and the teams have enjoyed the racing. Even months before the event the cyclists have been training on the Valencian roads and the stage routes, as part of their preparations for this competition. Now we can rest for few days before we start to prepare the next edition with the same enthusiasm as this year”.

Regarding other categories and prize winners, the jersey of the general combined was won by Groenewegen of Team Jumbo Visma. Winner of two stages and leader on the first day of the event. The best climber jersey of the VCV 2020 was won by Gonzalo Serrano from Caja Rural; The prize for the best young rider has also gone to the winner of the Valencian round, Tadej Pogacar, who also won the orange jersey of the combined general. The best performed team prize of the VCV 2020 was won by the Bahrain Mclaren team, and the prize for the best Valencian cyclist went to Oscar Cabedo representing team Burgos BH.

The last day of the VCV began from the town of Paterna, which including this year is the fourth consecutive year hosting the start of the fifth and last stage of the Valencian round. The finish line of the stage was yet again located at the Town Hall Square of Valencia. The stage was celebrated on a 97,7 km route, in which from the beginning four riders, Houle (AST); Samitier (MOV); Romano (Bardiani CSF) and Aguirre (EKP) made a break away from the peloton and managed to almost reach the town of Llíria (30km) with a one-minute lead.

The stage was celebrated without major changes during the route and around the halfway mark a escape group was able to increase distance with the peloton, but this being insufficient and not allowing them to finish successfully. When only 31 km of the race was remaining, while passing through the town of Náquera, the four leading cyclists saw the difference reduced to just 50 seconds. The peloton was led by the Jumbo Visma and Deceuninck, and they picked up the pace to hunt down the escaped cyclists. With only 16 kilometers to go, the escaped cyclists lead was reduced to only 30 seconds.

Once in Valencia, just ten kilometers from the sprint final, the escape was neutralized. During the last kilometers, the leaders of the peloton struggled to get into the first position and attacks were produced at all times between the Jumbo Visma, Deceuninck and Michelton before entering to the grand final. The 23-year-old Fabio Jakobsen from Deceunincck got his first victory in the VCV and beat his compatriot Groenewegen who had overtaken him in the sprints in Castellón and Torrevieja.

The results of the final stage.

Provisional classification of the stage: