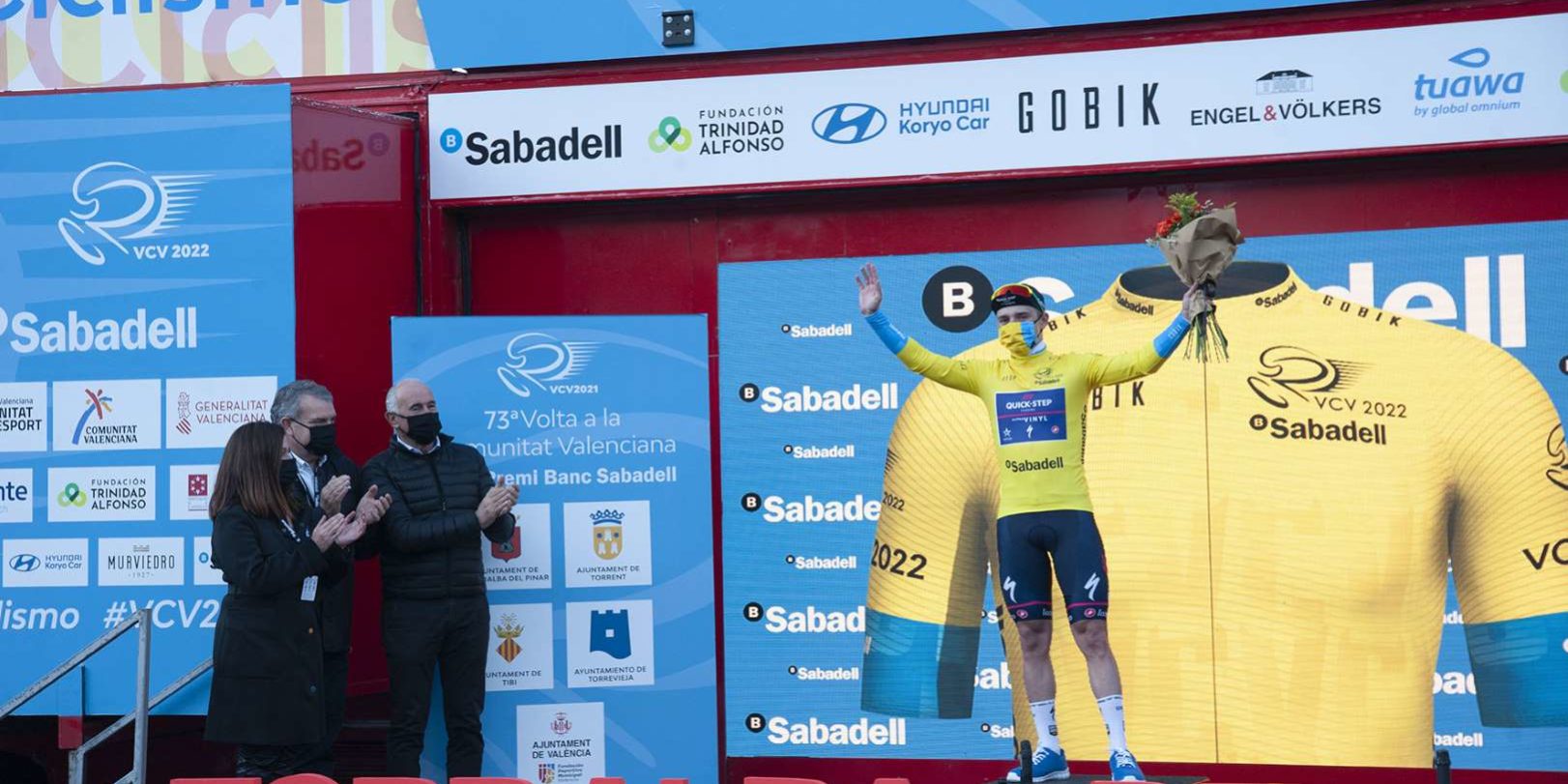 Remco Evenepoel is already wearing the yellow jersey that accredits him as leader of the general classification of the Volta a la Comunitat Valenciana Gran Premi Banc Sabadell 2022. The Belgian rider has won at the end of the first stage in Torralba del Pinar, after 166.8 kilometres through the Sierra de Espadán, passing through towns such as Alqueries (starting point), Betxí, Onda, Alcora, Artesa or Tales, among others. A first stage with several 2nd and 3rd category mountain passes that put the legs of the peloton to the test right from the start.

At 13:00 the 73rd edition of the VCV started next to the Town Hall of Les Alqueries. Present at the ribbon cutting in the town of Castellón were the Mayoress of les Alqueries, Esther Lara; the Minister of Education, Culture and Sport of the Generalitat Valenciana, Vicent Marzá; the Subdelegate of the Government in Castellón, Soledad Inmaculada Ten; the President of the Provincial Council of Castellón, José Martí; the Deputy Director General of Banc Sabadell, Jaime Matas; the Director of the Trinidad Alfonso Foundation, Juan Miguel Gómez; and the Director of the VCV, Ángel Casero.

As expected, the riders started with enthusiasm in what is the first big event of the season in the international cycling calendar. Thus, after 20 kilometres, a breakaway of five riders had already formed with a lead of about five minutes. Bou (EUS), Ezquerra (BBH), González (CJR), King (HPM) and Moreno (EKP) were leading the race before the arrival of the first mountain passes of the day.

At that moment, the teams of the ‘roosters’ such as Movistar or Quick Step took the lead of the peloton and increased the pace with the aim of reducing the advantage with the escapees. After overcoming the Costur (2nd) and El Remolcador (2nd) climbs, the gap between the head of the race and the chasing group was already just 1:40. A gap that has been reducing until, 32 kilometres from the finish line, the peloton put an end to the adventure of the escapees.

There was a crash with several riders involved just over 40 kilometres from the finish line. Although there were no serious injuries, two riders, Millan Carretero (KER) and Gavin Mannion (HUM) were forced to abandon the race as they were unable to continue the stage.

Approaching the finish line at Torralba del Pinar, 22 kilometres from the finish line, Euskaltel rider Mikel Azparren tried to break away, attempting to reach the finish line alone, but the peloton gave him little chance and quickly caught him. Then there was a new crash in the peloton, with Marc Soler (MOV) involved among other riders. Fortunately, there were no serious injuries and all the riders were able to continue. The last 10 kilometres remained, with five uphill and five flat to reach Torralba del Pinar.

The high pace of the last kilometres had taken its toll on the peloton and only 16 riders formed the leading group with 5 kilometres to go. It was with 4.7 kilometres to go that the moment of the day arrived. Remco Evenepoel (QST) didn’t wait any longer and launched his solo attack. Only Vlasov (BOH) tried to chase him down, without success. The Belgian showed his superiority and headed for the finish line, where he got a lead of 16 seconds with Vlasov and 31 with Carlos Rodriguez (IGD). A group with Enric Mas (MOV), Alejandro Valverde (MOV), Jakob Fuglsang (IPT), Luis León Sánchez (TBV) and Antwan Tolhoek (TFS) entered at 32′. Juan Ayuso, the first Valencian to cross the finish line, finished 1:04 behind Evenepoel.