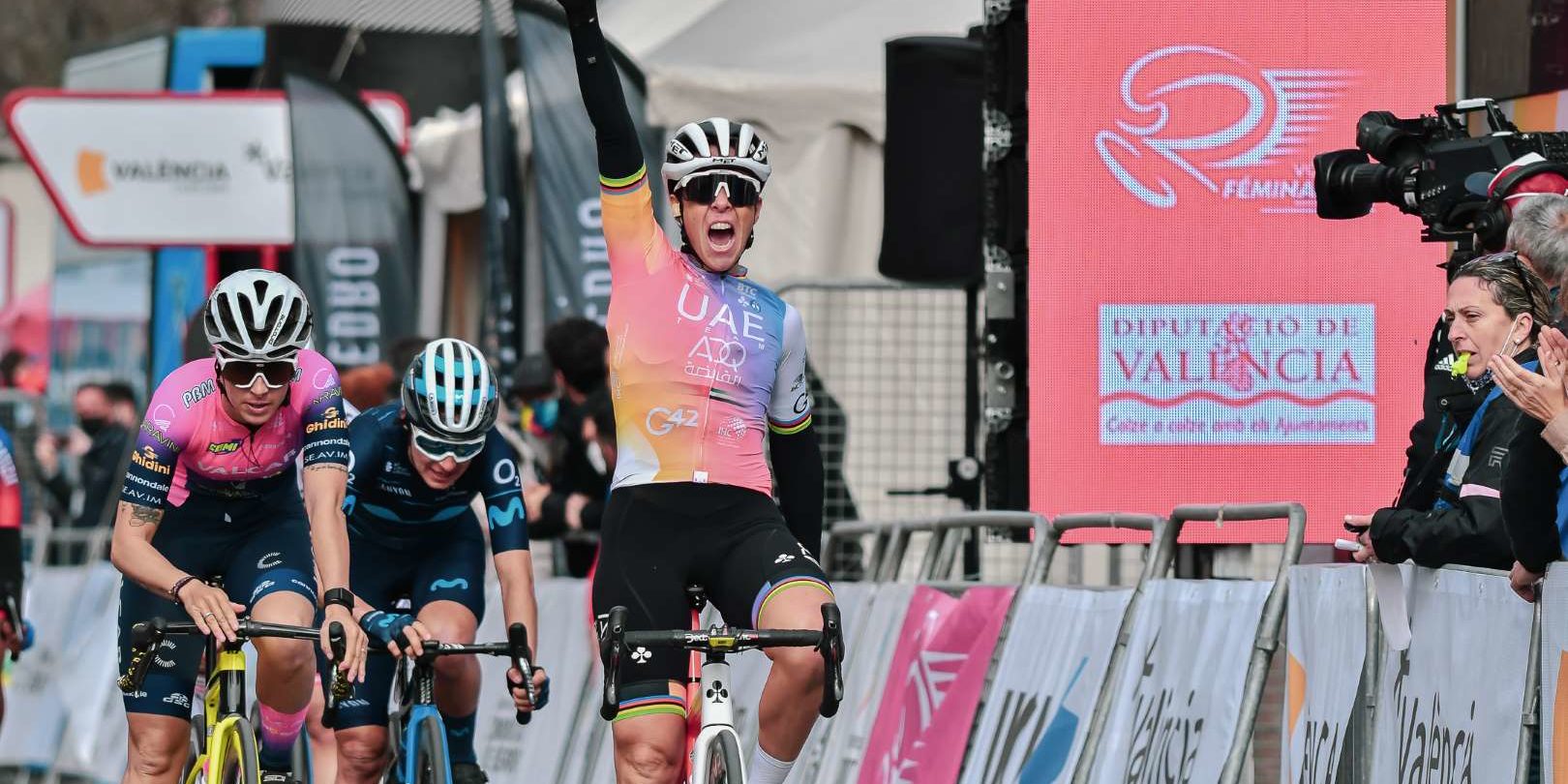 The Italian UAE rider won in a hilly sprint in Valencia and Sandra Alonso repeated as the best Valencian rider at the finish line.

The VCV Féminas Gran Premio Diputación de Valencia was once again a celebration of women’s cycling this Sunday in Valencia. In what has been the fourth edition of this prestigious race, the Italian UAE rider Marta Bastianelli won at the finish line in Avenida Maestro Rodrigo in Valencia, ahead of her compatriot Ilaria Sanguinetti and the Austrian Kathrin Schweinberger. Sandra Alonso, from the Ceratizit – WNT Pro team, repeated as the best Valencian rider at the finish line after climbing the podium in the 2021 edition.

The race started in Paterna at 9:15 and the peloton followed the same route as the men’s race. In a stage designed for a sprint finish, the different attempts to consolidate a breakaway were quickly neutralised by the peloton, where the teams of the favourites worked to ensure a mass finish.

The pace of the race was very fast, above 40 km/h, so the peloton arrived earlier than expected in Valencia. Just before entering the capital of the Turia, a fall caused a small break in the peloton, but the favourites were in the lead at the sprint on Avenida Maestro Rodrigo.

Unfortunately, a collision a few metres from the finish line caused the fall of the winner of last year’s edition and great favourite for the victory, Chiara Consonni. This cleared the way for another of the favourites, the veteran Marta Bastianell, from UAE, who took her second victory in the VCV Féminas after the one obtained in 2020. The third favourite, the Italian Barbara Guarischi, was disqualified shortly after the race by the stewards for the incident a few metres from the finish line. Sandra Alonso won the Comunitat de l’Esport jersey for the best Valencian rider at the finish line, repeating last year’s victory.

In short, a true celebration of women’s cycling, thanks to the VCV Féminas, a pioneer in sharing the route and economic prizes with the men’s race. It is also worth mentioning that the race was broadcast live on television (Teledeporte, Eurosport Player and GCN), a very important step in the commitment of the organisers of the Volta a la Comunitat Valenciana Gran Premi Banc Sabadell to women’s cycling.