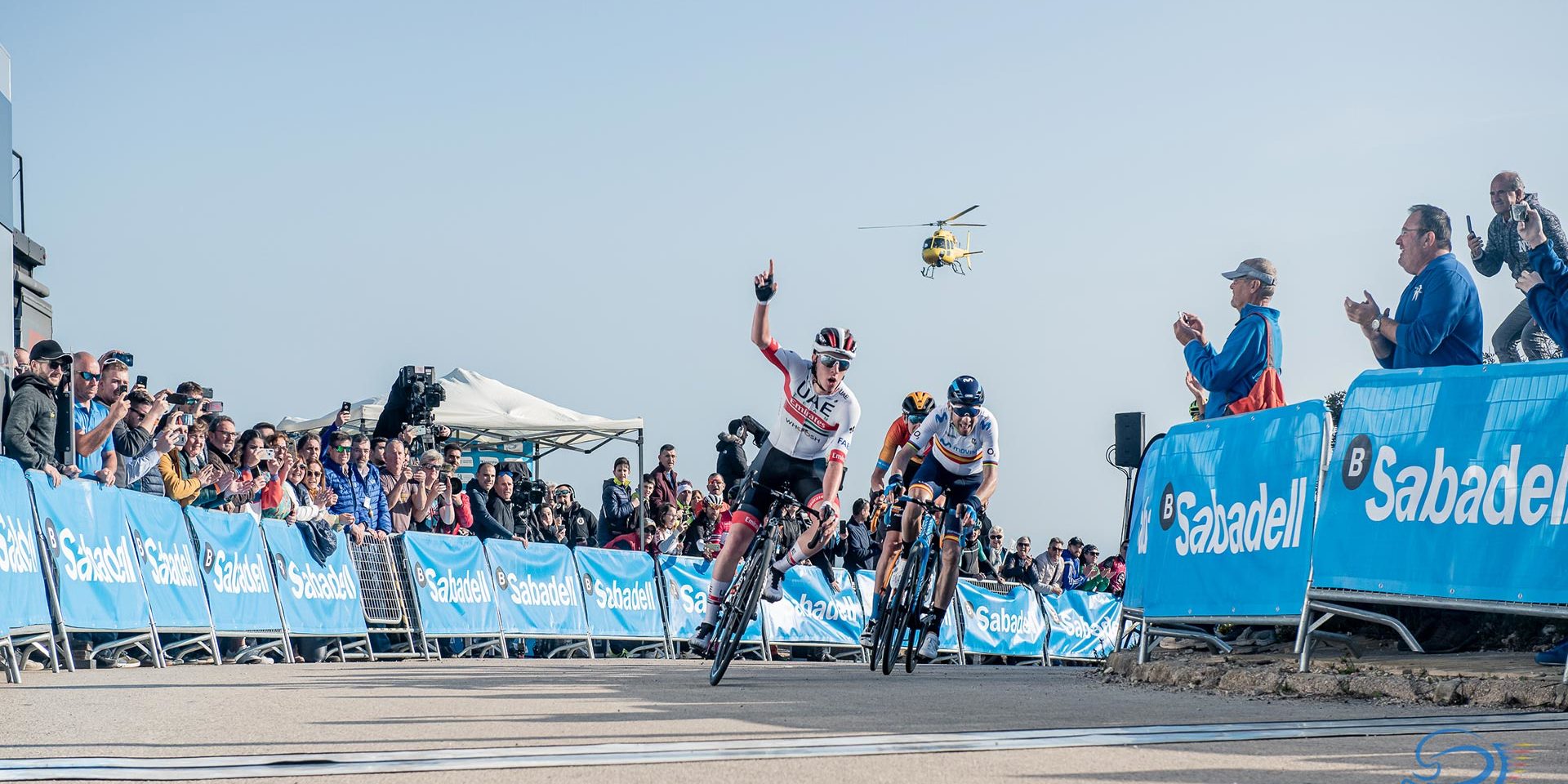 The cyclist TADEJ POGACAR wins the second stage of the 71st Volta a la Comunitat Valenciana Gran Premi Banc Sabadell. With this result the Slovenian cyclist of the Emirates team proclaims himself as the leader of the general classification.

After the stage finish, TADEJ POGACAR affirmed, “Before the start of the race, our goal was not to get the victory today, but thanks to the good teamwork, we had great possibilities to fight for the lead. Thanks to today’s results we will now be aiming for the general victory». The Granada-born CUADROS (CJR), who formed part of today’s breakaway group, is the first classified in the Mountain Grand Prix. The BAHRAIN-MCLAREN team was the best performing team on today’s stage.

In total 145 cyclists started the stage today from Torrent, a town that hosted for the first time the Valencian round since the 1987 edition, won by Stephen Roche. The cyclists faced an irregular stage, with a mountainous first part, with two mountain passes: Dos Aguas (category 2) and Alto de Millares (category 2). The second part of the 181 kilometer route was flat and the pace accelerated as the cyclists approached the finish line located in a spectacular surrounding in Cullera: just a few meters away from the meteorological radar. The arrival can be described as one of the unprecedented arrivals in professional cycling, a route with short but very demanding climb including ramps that tested the strength of many cyclists.

The main breakaway group escaped from the start of the stage, formed by five cyclists CAVAGNA (DQT); VAN EMDEN (TJV); DE MARCHI (CCC); CUADROS (CJR) and SÁEZ (CJR).VAN EMDEN (TJV) crossed first the intermediate sprint of the day, located close to Carcaixent at KM 132. The second to cross the 132 km mark was SAEZ (CJR) and third CAVAGNA (DQT). During the last kilometers of the stage a fall was witnessed, in where the cyclist TOBIAS FOSS (TJV) suffered a collar bone fracture and was evacuated by ambulance.

Once again, the peloton performed strong results by catching the breakaway group, thanks to their very high cycling speed. The first to drop from the group, due to strong performance effort, was Héctor Sáez. Of the four remaining escapees, the Frenchman CAVAGNA indented to escape aiming for a solo finish, as he did during last year’s edition of the Vuelta in Toledo. His attempt was ruined when only 4 kilometers were remaining to the finish line. Before this, when 9 kilometres were remaining, his escape companions, VAN EMDEN, CUADROS and DE MARCHI, had already been caught.

Along the last ascent close to the finish line several scuffles were witnessed, while the peloton was split in two. During the last meters POGACAR moved to the first position, ahead of VALVERDE, TEUNS and MARTIN, in a tight sprint full of emotion.

Tomorrow the 71st Volta a la Comunitat Valenciana moves to the province of Alicante. During the stage special attention is given to city of Orihuela and Vega Baja, due to the floods that this area experienced last September. The 174,5 km stage will start from Orihuela and finish in Torrevieja, being a completely flat stage, with a single mountain pass in the middle of the route.

Individual classification of the stage: