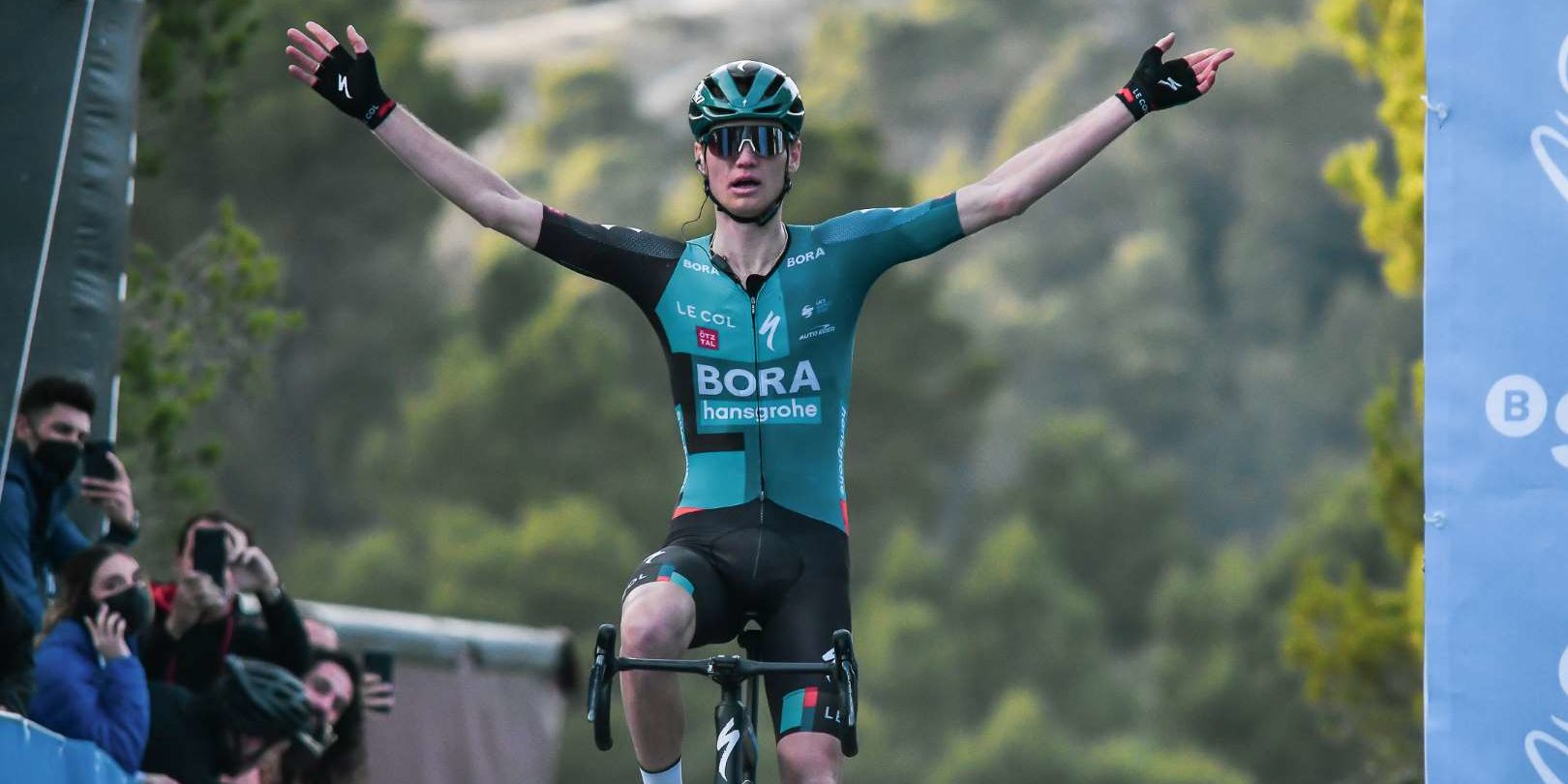 The Russian Bora rider gave an exhibition in the ‘sterrato’ section of the Queen Stage of the Volta a la Comunitat Valenciana Gran Premi Banc Sabadell 2022 and snatched the overall lead from the young Belgian of Quick Step.

The third stage of the Volta a la Comunitat Valenciana Gran Premi Banc Sabadell 2022 promised spectacle, and the truth is that it did not disappoint. The Russian rider of Bora-Hansgrohe, Aleksandr Vlasov, staged a spectacular display on the climb to the Antenas del Maigmó and not only won the stage, but also snatched the lead in the overall individual classification from the big favourite, the Belgian of Quick Step, Remco Evenepoel. The young Spaniard Carlos Rodríguez, from Ineos Grenadiers, finished the stage second, confirming his sensational role in this VCV 2022, while Enric Mas finished third. Evenepoel, totally exhausted, reached the finish line eighth, 41 seconds behind the winner.

Alicante’s Town Hall Square hosted the start of the third stage of the Volta a la Comunitat Valenciana Gran Premi Banc Sabadell 2022 on Thursday. The ribbon cutting ceremony was attended by the Government Subdelegate in Alicante, Araceli Poblador; the Mayor of Alicante, Luis Barcala; the Deputy Mayor of Alicante, Mª Carmen Sánchez; the Deputy for Alicante, Alejandro Morant; the Deputy General Manager of Banc Sabadell, Jaime Matas; the Director of Projects of the Trinidad Alfonso Foundation, Carles Baixauli; and the General Manager of the VCV, Ángel Casero.

This was the queen stage of the VCV 2022 and the teams and riders were ready for battle. Thus, from the first moment, there were attacks from groups of cyclists who wanted to escape; all of them neutralised by a peloton that was not yet willing to let a breakaway consolidate. It was not until after the first 50 kilometres of the race that 11 riders broke away.

But the victory was to be decided in the last 10 kilometres, whatever happened first. Jan Tratnik, from Bahrain Victorious, escaped from the breakaway and tried his luck alone, even taking the lead in the ‘sterrato’ section, just before the end. It seemed that he could even make it to the finish, but the fight behind made the already depleted peloton increase the pace and ended up catching the Slovenian.

With 4 kilometres to go, the battle of the ‘cocks’ began. Evenepoel, Vlasov, Rodríguez, Mas, Valverde, Ayuso and some others formed the group from which the stage winner would emerge. All eyes were on Evenepoel, leader and big favourite, but it was Vlasov who won the stage. The Russian attacked in the middle of the spectacular dirt section and left the Belgian stuck. Only Carlos Rodríguez and Enric Mas tried to catch Vlasov, but without success. The Bora rider won with authority at the finish line and snatched the lead from Evenepoel who could barely defend second place by a few seconds with Carlos Rodriguez.

In short, this third stage of the VCV 2022 offered a tremendous cycling spectacle, which leaves some margin for this Saturday with respect to the general classification. In principle, the stage between Orihuela and Torrevieja is designed for a sprint finish, but with the overall so tight, you never know.

At the end of Friday’s stage, Aleksandr Vlasov admitted to being «very happy about the victory». «It’s my first race with my new team and I think we have shown that we can do great things. I hope that the rest of the season will continue in this way», said the Russian.